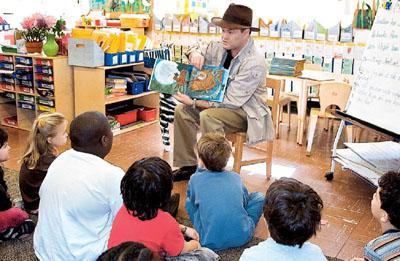 For what seemed like decades – in fact only two seasons (58 episodes) – Micky Dolenz played a drummer on the hit ’60s television series, “The Monkees.”

As an 8-year-old, I faithfully watched. After nap time with the Three Stooges, the Monkees’ zany antics seemed familiar and made me smile. With that history disclosed, I give you “Gakky Two-Feet,” a children’s picture book by former Monkee, Micky Dolenz.

Gak is a guy unlike the quadrupeds in his hominid tribe. For him, walking on two feet feels more natural than galloping around on all four. It makes him oddly different, a fact his normal bug- and berry-eating counterparts never let him forget. But like most picture-book protagonists, his oddity eventually helps him save the day.

Even if the plot premise isn’t altogether original, the prehistoric setting most certainly is, as is the possible series Dolenz would like to see unfold. We caught up with Dolenz in a telephone interview to find out what inspired this delightful romp and the books that may soon follow.

Question: What inspired you to write a children’s picture book?

Answer: A few years ago, during the celebrity book trend, another publishing house called and asked if I would be interested in adapting the lyrics to a Monkees song into a children’s book. That presented several problems. First, I didn’t write the songs so I didn’t own the rights. Second, it didn’t excite me much because I couldn’t think of any that would lend themselves well to a children’s book. The way I have to work in any field is my muse has to show up. She’s a beautiful woman wearing a satin dressing gown and holding a 9mm semi-automatic weapon. She’s tough. She wasn’t there for that one.

A: I have a subscription to Scientific American magazine, read it faithfully. I read an article about the evolution of hominids and bipedalism, and a story popped into my head about the first hominid to walk on two feet. I’ve always had an interest in anthropology. I’ve always tried to imagine what it must have been like to be there for those pivotal moments in evolution; moments of epiphany, like when the first person manipulated fire or discovered how sharp flint could be.

I knocked the first draft out in a couple of hours. A year later, I was introduced to editor Nancy Paulson at Elaine’s in New York. I mentioned in passing that I’d written a story, and she said, “There are an awful lot of those books out there, but send it in.” I did, then, lo and behold, I got an e-mail back saying she loved it and I should come in so we could talk about it.

Q: How did you feel about the editorial process – revisions, for example?

A: How I take revisions or any criticism depends on who’s offering it. It’s the same reason I don’t really read reviews, good or bad. It goes back to getting a really great review from a writer who had seen and written about one of my shows. I was so pleased I called her up to thank her and to ask if she wanted to know the next time I would be in town to perform in a show. She was very nice but explained she wouldn’t be covering other shows – that she was the food editor and was just sitting in for the entertainment writer for that show.

So if I take criticism seriously or make revisions, the suggestions have to come from someone qualified to make them in the first place. From Nancy, absolutely, I paid attention.

Q: What changes did she suggest?

A: Most of them had to do with the mechanics of a picture book. For example, I had suggestions on illustrators, artists I liked. Nancy explained that it’s customary for the editor to find a good match for the writer, and I loved what David Clark did – the illustrator she picked for the work. I gave him some reference materials because while I agreed it was important that the characters be kid-friendly, I also wanted them to be based on anthropological research. David and I e-mailed back and forth, and he came up with preliminary drawings.

Q: So all the revisions were based on illustrations, none on the text?

A: Some changes in the text were also made because I discovered to my pleasure and surprise, that some things are said in the illustration so the writer doesn’t have to repeat them. It’s a picture book, not a book with pictures in it. The whole becomes greater, more important than the sum of its individual parts. And while I made suggestions, you don’t keep a dog, then bark yourself. I trusted David and Nancy. And I was beyond happy with the results. It was better than what I had ever imagined myself.

Q: What legacy do you hope Gak offers a new generation?

A: In this case, I guess the moral is, don’t be afraid to be different because different may turn out to be to your advantage. That’s what “natural selection” means, isn’t it? When we say that nature selects, it doesn’t come out of some office of selection – there is no human stamp of approval. It’s more practical. It’s born of necessity. “Different” has taken on such a negative connotation. I’d like to change that. Differences are not bad. I mean, there is a difference between a poodle and a great Dane, but one isn’t better than the other. They’re just different. If this book offers a legacy, I guess that would be it.

Q: You’ve coined the term, “anthro-mythology,” to describe “Gakky Two-Feet.” Are there other anthro-mythological tales in the works?

A: Yes, I hope so. I’m working on one about the first musical instrument, the first flute you could play and actually alter the pitch. It was discovered in a cave in France and dates back something like 65,000 years ago, to the Neanderthals. And I can see it as a great series – fun little stories that explore prehistoric firsts – first fire, first wheels, first flute. They aren’t meant to be textbooks. They are playful. They are fables. Obviously, Gakky-Two Feet and the other characters I’ll create didn’t exist. But the evolutionary events that inspired them were real. That’s what intrigued and interested me. Without that spark, I wouldn’t have done it.

Q: Would you have liked “Gakky Two-Feet” if you had read it as a child?

A: Yes, I think I would have. I loved Dr. Seuss. I loved science fiction. I read Grimm, Golden Books. I read Bradbury and “War of the Worlds” at a very early age. I wrote in reaction to that reading, a story about these guys making a trip to the moon to discover great, giant lizards.

Reading at school, especially about math and science has always been tough. They can be dry subjects – just the facts. It takes an exceptional teacher with a flare for drama and color to bring them to life, and I distinctly remember having a teacher like that when I was young, about 11. He was like Mr. Wizard. He’d make it interesting for me. I hope my children’s books follow that same track.
​ 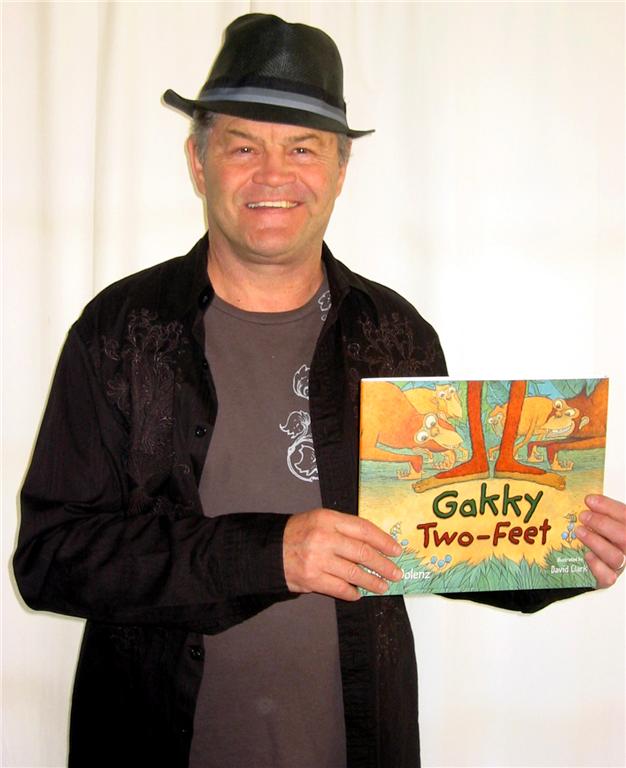