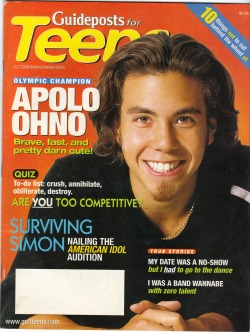 Short-track speed skating is a fast-paced, cutthroat sport. The ice is slick, the blades are razor-sharp, and the turns are wicked. One mistake, one small miscalculation, and you slam into the wall—hard. To make it in short-track, you have to be tough. Apolo Anton Ohno is one tough guy.

He’s also one really nice guy His amazing performance on the ice at the 2002 Olympics in Salt Lake City not only won him gold and silver medals—it won him a spot in the hearts of fans worldwide. So how did this cute guy with the signature soul patch become a short-track phenomenon? Natural talent—and hours (and hours!) of training.

Apolo grew up in Seattle, the son of a single father. His dad wanted to keep him out of trouble, so he worked hard to make athletics—including swimming and inline skating—his son’s focus. Apolo first stepped onto the ice after mastering the inline skating circuit. “Just to try something different,” he says. He quickly blew the competition away.

Once he realized he had the talent to be an elite short-track skater, he gave it his all—“110 percent,” as he likes to say. Five years later, at age 19, Apolo became a superstar.

Guideposts for Teens caught up with Apolo as he was training for the 2003 World Championship in Warsaw, Poland. (He ended up taking silver in the 3,000 meters there!)

GP4T: We heard that you were watching the 1994 Olympic Games in Lillehammer, Norway, on television when you first got the urge to try short track. True?
Apolo: Yes, that’s true. The speed was the number-one attraction for me. Everything looked so smooth. I was amazed by how far the skaters could lean into the turns. It didn’t look natural or real. I kept thinking, “How are they doing that?” And I knew I was going to give it a try.

GP4T: Did you realize you had a talent for it right away?
Apolo: No. At first I was pretty bad—I busted my butt a lot! But I practiced, and I learned a lot. I finally believed I might be really good at it after a coach I respected noticed me. I started to realize my potential at the Olympic Training Center in Lake Placid in 1996.

GP4T: How do you deal with the mental pressure of competing in such an aggressive sport?
Apolo: It is a very aggressive sport, that’s true. But I think any athlete has to learn to deal with pressure. I have my off days and my on days. Most of the time, you just push past it and make things happen. I think the pressure actually makes me perform better sometimes. And once I’m on the ice, all I think about is skating.

GP4T: What’s most important to winning the short-track events—endurance, speed, or focus?
Apolo: I think it’s the whole package, really. You have to have it all. If you’re just fast, so what? Everybody’s fast. If you’re just focused, again, everyone is. You have to pull all those things together to win.

GP4T: What were you like as a teenager in Seattle, before you went to Lake Placid?
Apolo: You know, I was a normal kid. I hung out with my friends, I played basketball, went to the park, had barbecues. As long as I was with my friends, I was happy.

GP4T: Do you think the fact that your father was a single parent made the two of you closer?
Apolo: I do. I think sometimes that’s how it works out with single parents. He supports me 100 percent. He wants me to succeed in sports and in life, so it’s a partnership. I think we take our parents for granted sometimes, but they’re so important. Eventually, most people figure that out.

GP4T: You were so hot on MTV’s Total Request Live after the Olympics. How did you learn to break-dance?
Apolo: Ha! The break dancing was a little something that I used to do for fun back in Seattle—something all my friends did during lunch break at school. But it was fun doing it and being on TRL—just awesome!

GP4T: What kind of music do you like, and what’s in your CD player right now?
Apolo: I like mostly hip-hop and R&B. Right now, I have a burn mix in my CD player that includes a guy named Wayne Wonder, an R&B singer from Jamaica.

GP4T: What sports do you play just for fun?
Apolo: Short-track is my specialty, but I do enjoy many other sports—pretty much all other sports, actually. But I do them for fun, so it’s no high-caliber performance.

GP4T: Is there a sport you’ve tried that you actually stink at?
Apolo: Snowboarding! I was in Italy a while back, and I went snowboarding one time. I kept falling, and the people on the lifts were looking down at me, kind of stunned. I don’t think they’d ever seen one person do so many flips on accident. I kept landing on my head.

GP4T: Do you have to worry about getting hurt when you try new sports?
Apolo: Well, I try to get out there and have fun and live my life. But I have to be a little tentative, because an injury would put an end to my career.

GP4T: What’s next for you?
Apolo: I’m training and competing right now, so my mind and goals are focused on short-track. Beyond that, I’m not certain. I would love to pursue an entertainment career. With my success in the Olympics and through my sport, it really has shown me so many options that I could go with in my future. Only time will tell.

GP4T: What would you like people to know about the real Apolo Ohno?
Apolo: I’d like them to know that I’m just normal—that I focus my time and energy toward something I love and that it has paid off in the long run. But I like to do what most teens like to do, hang out with my friends and have a good time.

GP4T: What advice do you have for teens?
Apolo: Follow what you believe in. Don’t let anybody or anything stop you from reaching your goals! Dream big and have fun.


Some fast facts on the short-track champ

• Apolo finished high school (with great grades) via the Internet Academy.
• He once sang (Alleluia!) in an all-boys choir.
• He was a regional champ in breaststroke as a swimmer.
• He was one of People magazine’s “Most Beautiful People” in 2002.
• He had the flu at the 2002 Olympics—he was sick in bed for four days before he skated!