January 2012, Chronicle -- FOR MATURE READERS ONLY 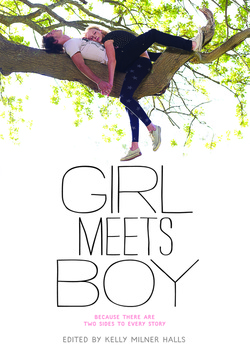 Girl Meets Boy:
Because There Are Always Two Sides to Every Story

Featuring story pairs for older YA readers (16 & up) by:

This is a book expressly for readers 16 and up -- not intended for young readers.  It explores the lives of teens struggling with complicated issues.  And iIt is a true departure from the books I usually produce, so please keep that in mind.   This is not nonfiction and it is not intended for young children.

Chronicle published it in January of 2012.  Hope you like it.  It's a project that makes me really proud!  Amazing writers.  Amazing stories!

Publishers Weekly
Twelve writers answer Halls’s question: “What if a group of authors took on the challenge of perception—boys versus girls?” Together, they create a thoughtful collection of paired short stories (and one joint offering) that give two distinct perspectives on the same events. While romantically themed, the stories do not all end in love connections. In James Howe and Ellen Wittlinger’s stories, a gay teen learns the person he has been chatting with online is actually a girl; meanwhile, in Sarah Ryan and Randy Powell’s joint story, “Launchpad to Neptune,” a teen reunites with his first crush, only to find Stephanie has transitioned to Stephen. The most compelling twin stories may be from Terry Davis and Rebecca Fjelland Davis, which center on a Muslim immigrant and an Iowa farm girl in love; Rafi’s story explores prejudice and being caught between cultures, while Kerry begins a protest when she learns about a hog factory that will destroy their community. This story best exemplifies a theme that runs throughout: it’s impossible to know everything someone is thinking and feeling—even when you are in a relationship together. This important idea is executed with finesse throughout. Ages 14–up. (Jan.)

Kirkus STARRED
This conceptually unique collection of short story pairings by a constellation of teen-literature stars explores a variety of relationship types as the respective male and female involved in each one experience them.

In the first, a witty teen seeking to stop cheating on his girlfriends is drawn into a messy sexual relationship with a troubled (but hot) girl who is an abuse survivor. In another, a likable, tough girl muscles in on a bully who is harassing the object of her crush. In the third, a gay 17-year-old agrees to an in-person meeting with an online-chat buddy in a tale both sad and sweet. Two separate stories examine the strain felt by couples of different ethnic backgrounds as they struggle with prejudice and familial expectations. Finally, a boy re-encounters someone with whom he’s long been enamored, only to discover she’s undergone a transformation. Common themes—that are less about gender-based perceptions than they are about teens struggling to be seen and loved for who they truly are—knit these stories together. Each of the authors excels at creating vibrant, sympathetic, honest characters with voices that will appeal to older teens, male and female alike.

A superb offering—and therefore a shame that its cover design of a boy and girl in a clinch makes it look like a run-of-the mill romance, which may limit its appeal. (Short stories. 14 & up)

ALAN Review - Jeuel A. Davis
The age-old tale of "he said she said" never dies when it comes to romantic relationships. Especially the teenage ones. A clever compilation of six stories told through the eyes of the male and female, the dynamic YA authors who created the stories seek to expose the roadblocks and romanticism that stem from the various and sundry misconceptions of the adolescent mind. From a tortured soul searching for real love, to an interfaith couple defying their not so compliant parents, Girl Meets Boy is the perfect piece of literature to make you ask, "If I knew the other person's point of view, could I be in a successful relationship?" Cliche, but true, there really are two sides to every story. And at the end of the day, we can always learn from our differences. Whether they help us or hurt us, they will always make us stronger. Reviewer: Jeuel A. Davis

VOYA - Katie Mitchell
In this collection of six vignettes, readers experience both the male and female perspective of affairs that are challenging, life-changing, or seemingly inexplicable. Bobby Wildcat bemoans his short stature and the bullying he endures in his close-knit tribal community. Then, without warning, he finds himself drawn to Nancy Whitepath, the town's large and successful basketball talent. Bobby's insecurities often lead him to misinterpret how Nancy is responding to him. In "Want to Meet," Max plans to meet his online crush, only to be shocked that Alex is a girl ("Alex, it was a gay chat room, okay?"). Alex's reasons for starting a relationship online are just as complex as Max's. "The Mouths of the Ganges" and "Mars At Night" look at the challenges that Kerry and Rafi experience in their relationship. He is Bengali, from a devout Muslim family, while she has grown up on an Iowan farm and lives with constant disapproval and guilt trips from her grandmother. Their relationship is only one of the many issues they face, including the post-9/11 prejudice Rafi endures and the potential destruction of Kerry's farming way of life. These short stories are collected in the same "he said/she said" format made popular by books such as Cohn and Levithan's Nick and Norah's Infinite Playlist (Knopf, 2006/VOYA April 2006) and Barkley and Hepler's Scrambled Eggs at Midnight (Speak, 2007/VOYA August 2006). For some of the stories, there simply is not enough development for the reader to cultivate firm opinions about characters, their motives, or their situations. Some of the breakout stories, such as Rafi and Kerry's tale, beg for a home in their own novel. With its proliferation of romance and hormonally-charged electricity, this book should be an easy sell to readers who like escaping in lighter contemporary relationship stories. Reviewer: Katie Mitchell

Children's Literature - Debra Lampert-Rudman
Anyone who has ever been in love with someone and wondered time and again "What was he/she really thinking" will love this short story anthology written by talented and exciting Young Adult authors including Chris Crutcher, Kelly Milner Halls (who also edited the book), Joseph Bruchac, Cynthia Leitich Smith, James Howe, Ellen Wittlinger, Rita Williams-Garcia, Terry Trueman, Terry Davis, Rebecca Fjelland Davis, Sara Ryan and Randy Powell. The stories are presented in pairs—from both the boys' side and then the girls' side—with carefully crafted and believable characters all struggling for romance, the need to be understood, loved, and ultimately heard. The stories cover diverse subjects including a Muslim immigrant boy in love with an Iowa farm girl, a "toxic girl" and a great looking jock, and even one story where a boy discovers that the young girl he once loved is now a boy. Thought-provoking, well-written, and compelling, the stories are followed by an Authors and Inspiration chapter that YA readers will find truly interesting. Reviewer: Debra Lampert-Rudman

School Library Journal
Gr 9 Up—All of these stories except the last are told in pairs, with female authors writing from the girls' perspective and male authors from the guys'. Each gender remembers things differently, though some of the timeframes overlap, and delivers unique information. In the first set of linked stories by Chris Crutcher and Kelly Milner Halls, Johnny wants to stop lying, so he enlists Wanda, a troubled girl with her own issues, for help. Neither of them expects to fall in love or to end up where that leads. In Joseph Bruchac's and Cynthia Leitich Smith's pair, Bobby has a crush on Nancy, a bruiser who punched her last date. Could someone that strong ever be interested in a guy who used to be bullied? And in James Howe's and Ellen Wittlinger's selections, Max is nervous about meeting a boy he has been chatting with online. He's even more surprised when it turns out that Alex is a girl. Rita Williams-Garcia, Terry Trueman, Terry Davis, Rebecca Fjelland Davis, Sara Ryan, and Randy Powell also contribute tales. Some of the characters walk the line of stereotypes, but the predictability of their attributes and actions can also lend a charming touch since boys and girls have been known to see one another just that way. Not every set of stories works out perfectly: some are happy and others messy, giving the collection as a whole authenticity. Based on the title alone, this anthology might be a hard sell for boys, even with male characters in every story, but short-story fans will enjoy it.—Melyssa Kenney, Parkville High School, Baltimore, MD 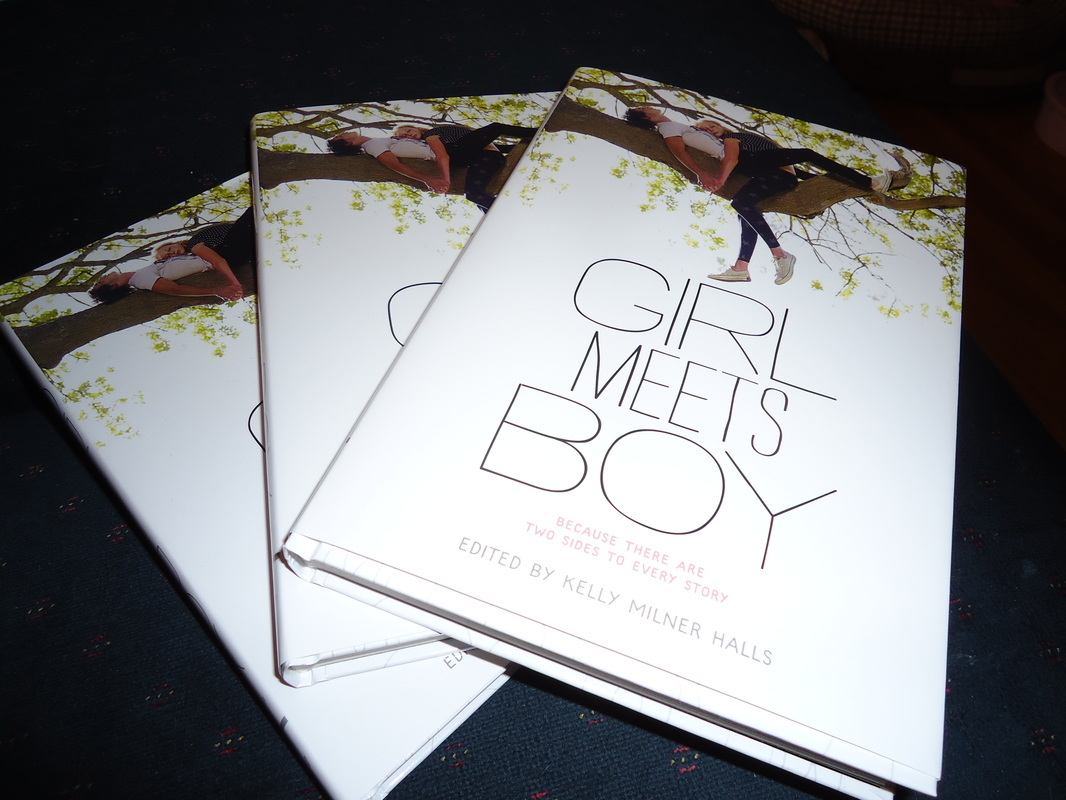