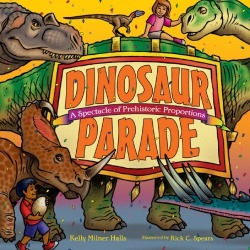 Dinosaurs: they're dead, which is no fun at all. What would be fun, however, is imagining the giant beasts being led in a circus-style march for our amusement: "So just for fun, we¹ll say they stayed and joined a Dinosaur Parade." This simple but informative reference book uses a consistent two-page template for each subset of dinosaur, with the creatures filing by on the top portion of the page while the accompanying name, pronunciation, size, era, location, and date of discovery are listed below. Each spread
kicks off with a humorous rhyme ("When banging noggins was the rule, fancy skulls made hard heads cool"), and the dinosaurs pictured are hardly grim killing machines -- each is drawn with a placid, even happy expression; the fearless multicultural group of children cavorting among them gives readers a sense of scale. The last spread is a bit of surprise, and features a paleontologist, some "mini homo sapiens," and a special guest from Hogwarts. Dino lovers will make good use of the glossary concluding the book.      --- Daniel Kraus

Several dozen smiling, brightly patterned dinos clomp across the spreads, with their names, sizes, naming dates and other data marching below on a running footer. Halls groups them by type-Sauropods, Ornithopods, etc.-to make physical comparisons easy, and Spears adds plenty of human fellow marchers to the line of behemoths for (loose) scale. So striking are the graphics and the design that the rhyming couplets that form the primary narration almost fade entirely into the background... With a group of "Mini homo sapiens," a Dracorex hogwartsia and a "Paleontologist" ("Size varies. Term first used in 1830") bringing up the rear, it's a parade that won't run out of spectators any time soon. Eye candy for younger fans. (Informational picture book. 4-8)

Grade 1–3—A new approach to an old (but always popular) subject. Each spread is dedicated to a grouping of dinosaurs, for example, the theropods or ornithopods. Colorful, cartoon drawings of dinosaurs from these groups march across the pages along with children of varying race and ethnicity either beside them or on their backs, with the intent of showing the size of the reptiles in relation to the youngsters. Rhyming text follows along with this fictionalized portrayal of dinosaurs parading. A substantial border runs along the bottom of the page naming each dinosaur pictured and revealing facts about it, including where it was discovered and when it got its name. The last page gives characteristics of each group of dinosaurs plus information about how paleontologists name them. Although some interesting facts can be obtained from the borders and back page, the rhyming text is weak.--Christine Lindsey, Lake Superior Primary School, Ashland, WI 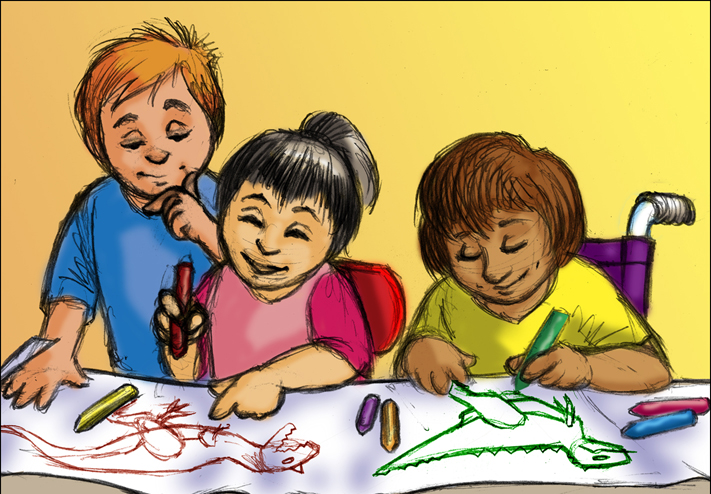 These two spreads were originally intended to introduce the fictional parade -- to suggest the dinosaur with children drawings sprang from the imaginations of the kids drawing a dinosaur mural.  But they were dropped in favor of more dinosaurs. 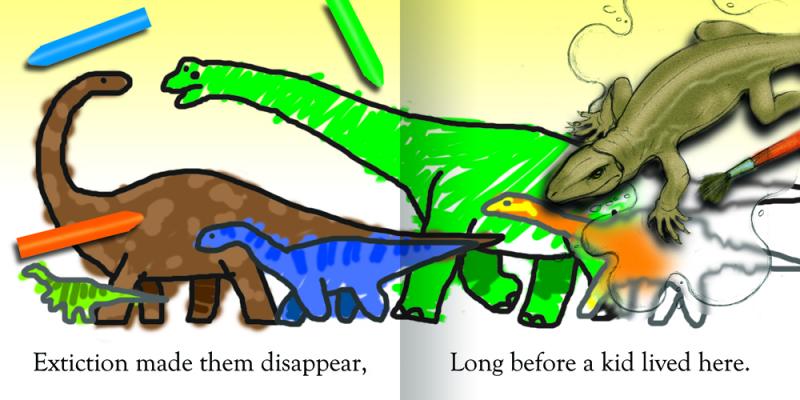