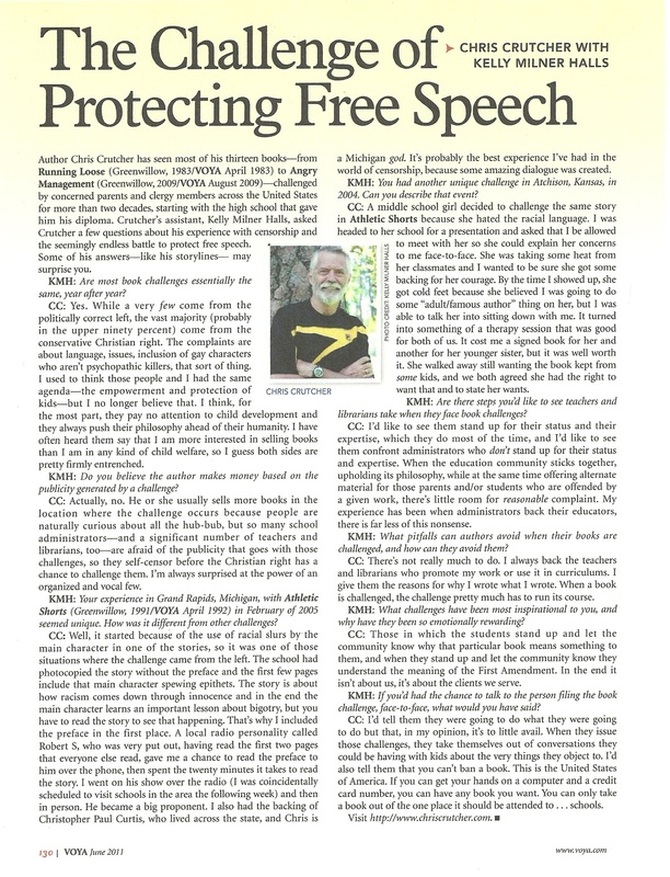 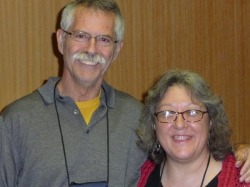 ...I work as Chris Crutcher's assistant -- and I have for more than six years.  He travels so much, coordinating that travel requires a lot of planning and communication.  That's hard for Chris to do when he's on the road or focused on writing a new book.  So I work with his hosts around the world to prepare for his arrival, then he steps in to do the really hard work.

I love working for Chris because the people who invite him to speak at schools, university, libraries and conferences are so nice, it's a pleasure to help.  I also love working for him because I think his stories and speeches really help people feel a little bit better about life.

Besides, he's always been a great friend to me.  And yes, I know how lucky I am. 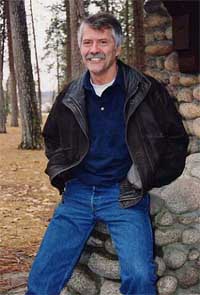 Once WHALE TALK was ready for release, I was ready to write about it.  But every other article I'd written about Chris had gone without author photos.  HarperCollins could never find one for me, though one did exist.  So I convinced him to let me take some new author images.  "Come on," I said.  "How long has it been?"  He hadn't had new author photos in more than a decade.  So we headed for a park not far from my house, next to my daughter's elementary school because it was heavily forrested.  I liked the idea because he always said he grew up in Cascade, Idaho, a logging town.

He was pretty darn patient.  I think he lasted nearly half an hour, which is a LONG time for him, when it comes to this kind of project.  He's fine posing with kids, teachers and librarians because that's for THEM.  But this, he thought, was embarrassing.  But the pictures were great, so we didn't need more time.  This was one of my favorites -- one of his favorites too.  And for five more years, it was his author photo in most applications...this and the headshot from the same series.  At least I had author photos to send to my editors now.  And I didn't even have to wonder about photo releases.  I KNEW these shots belonged to the author.  Mission accomplished. 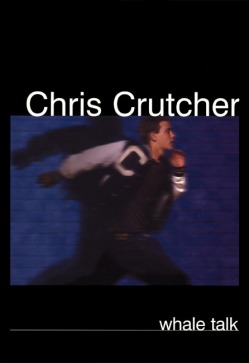 By early 2000, I was forced by my ex-husband's bad karma (cross-dressing in the driveway) to move out of my home in Colorado and into a home almost anyplace else.  I'd visited five cities in search of a home my girls might love -- Tempe, AZ, Cleveland, OH, Santa Fe, NM, Austin, TX and Spokane, WA.  Tempe was too hot.  Cleveland was too gray.  Santa Fe was too expensive.  Austin was too conservative.  Spokane was JUST right.  So we moved to the pearl of the Inland Empire, the gem of the Pacific Northwest -- Spokane.  And I even knew someone that lived here.

Chris and I had breakfast about once a month, emailed every time I had a parenting crisis.  And he shared tidbits of news about how his new book WHALE TALK was going.  It sounded so great.  A book inspired by Washington State's school shooter, Barry Loukitis.  I couldn't wait to read it.

"I sent it to Susan," he told me the day before he headed for Texas for the TLA conference in April.  "It's done."

"After Susan edits it," he said.  "Shouldn't be too long."  I wasn't the only one waiting.  It was his first book in nearly five years.

The next day, I turned my TV on -- cable news, my favorite -- and there it was, Columbine.  Just 20 miles south of my old home town, two trenchcoated thugs were peppering their classmates with semi-automatic gunfire.  Barry Loukitis was suddenly bush league compared to these angry shooters.

I sent Chris an email.  "Oh god," I said.  "Have you seen the TV?  What's going to happen to your book now?"  I knew there was no way he'd risk publishing a shooter book that would make him look ruthless and opportunistic.

That version of WHALE TALK had died with the victims of Columbine.  But TJ's new story wasn't far behind.  And Chris swears it's a much better book.  I asked him when he got home, "Are you okay?  I mean, it was a whole book."  As a writer myself, I knew how sickening such a loss could be.

Talk about zen.  I would have been in tears. 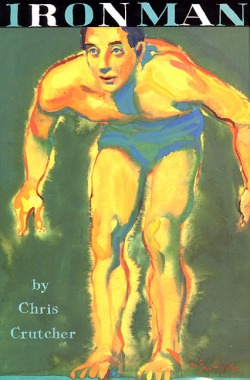 When I first met Chris Crutcher, IRONMAN was his most recent book.  That's a nice way of saying it was a long time ago.  I'd been assigned an article about this "risk-taking" young adult novelist for KidsReads, part of the Book Reporter Network.  Actually, I was the Executive Editor at KidsReads back then.  So I made the assignment myself.  But I kept hearing his books were about rough kids, real kids, kids that didn't say "Gee whiz!"  My oldest daughter, Kerry, was one of those kids at 14.  So I had to know more.

I'm not sure what it was about that first phone interview that made us friends, rather than simple professional acquaintences.  But whatever it was, I'm grateful for it.  Because we've been close ever since.

So if you find yourself over on Kids Reads and notice that all his books, from RUNNING LOOSE to IRONMAN were reviewed by Kelly Milner Halls, now you know why.  I read them all before I talked to him.  Once I started, I just couldn't resist reading a couple more.  I still feel that way today.  He's not just a great friend -- he's truly my favorite author.