"At a time when young activists are looking for inspiring role models, Kelly Milner Halls has produced a heart-wrenching and enthralling book. Middle-grade readers will be both informed and galvanized by these little-known stories of remarkable youth who acted heroically during the Second World War. "

--Cynthia Levinson, award-winning author of The Youngest Marcher: The Story of Audrey Faye Hendricks, a Young Civil Rights Activist and We’ve Got a Job: The 1963 Birmingham Children’s March


“Kelly Milner Halls has crafted twenty fascinating accounts of young heroes from World War II who ordinarily don’t make the history books. In clear, approachable language, Halls’ solid research and passion for her subject are evident as she unfolds the stories of youths who forged documents so that others might live, formed secret resistance groups of other kids to fight the evils of the Nazis, saved fellow soldiers despite being wounded and too young to serve in the military legally, and so many more. This is a book that will inform, amaze, and inspire today’s young people, as much as it did me.”

--Larry Dane Brimner, Sibert Medalist and author of Finding a Way Home: Mildred and Richard Loving and the Fight for Marriage Equality, Accused! The Trials of the Scottsboro Boys: Lies, Prejudice and the Fourteenth Amendment, Blacklisted! Hollywood, the Cold War and the First Amendment, Twelve Days in May: Freedom Ride 1961 and many other outstanding books.


"Voices of Young Heroes: A World War II Book for Kids is a riveting and diverse impressively researched collection of stories that will resonate for readers today, teens and adults.  I loved meeting these determined and inventive kids from all over the world who made such brave and moral choices to take action during this devastating time in our history. Milner Halls' impressively researched and well written collection offers a breadth and depth not usually featured in World War II collections. The opening section presents concise information about World War II. Colorful illustrations, photos and sidebars invite the reader in. But it is the twenty profiles of young people from America, Denmark, France, Germany, Great Britain, Holland, Japan, Poland, and Russia that keep us turning the pages. From Anne Frank to Hitler’s godson, under age American soldiers to brother and sister spies Hans and Sophie Scholl, each stood up to stop the dangerous spread of Nazism. Long after the book is closed their stories continue to inspire and give hope for today’s challenging times."

--Claire Rudolf Murphy, author of Martin and Bobby: A Journey Toward Justice, My Country Tis of The: How One Song Reveals the History of Civil Rights, and Marching with Aunt Susan: Susan B. Anthony and the Fight for Women's Suffrage.


"Voices of Ordinary Heroes reminded me of the big impact ordinary people can have. The heroic stories Kelly Milner Halls shares represent people from a wide range of countries, races, and religions, and like all her books it’s well-researched and compelling. After reading about these people, most of whom I’d never heard of, made me feel hopeful and inspired”

--Kris Dinnison, educator and YA author of You and Me and Him. 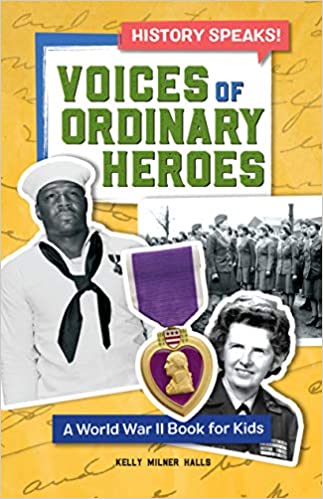 Voices of Ordinary Heroes, is a compelling, well-researched book about World War II, a war that truly turned the tides of world history.  Kelly Milner Halls brings this war up close and personal, through tales of average world citizens stepping up to fight, in whatever way they could, against the Axis powers threatening world domination. An important, informative, fun read.

--Chris Crutcher, Author and son of a WWII bomber pilot

“Those who won the Second World War have been called the Greatest Generation. In Voices of Ordinary Heroes, Kelly Milner Halls shows the reader how they earned that name. Each of the many stories in this book makes the heart ache for the wonder of the dedicated and selfless way they lived, and often sacrificed, their lives. This powerful book will help make sure a new generation never forgets the voices of ordinary heroes.”

―Trent Reedy, author of Words in the Dust, If You’re Reading This, and the Divided We Fall trilogy

“Voices of Ordinary Heroes reminded me of the big impact ordinary people can have. The heroic stories Kelly Milner Halls shares represent people from a wide range of countries, races, and religions, and like all her books it’s well-researched and compelling. Reading about these people, most of whom I’d never heard of, made me feel hopeful and inspired”

―Kris Dinnison, author of You and Me and Him​